'Extending the power of the people:' The 22nd annual Barbara Jordan National Forum | LBJ School of Public Affairs | The University of Texas at Austin
Skip to main content
News • March 24, 2019

'Extending the power of the people:' The 22nd annual Barbara Jordan National Forum 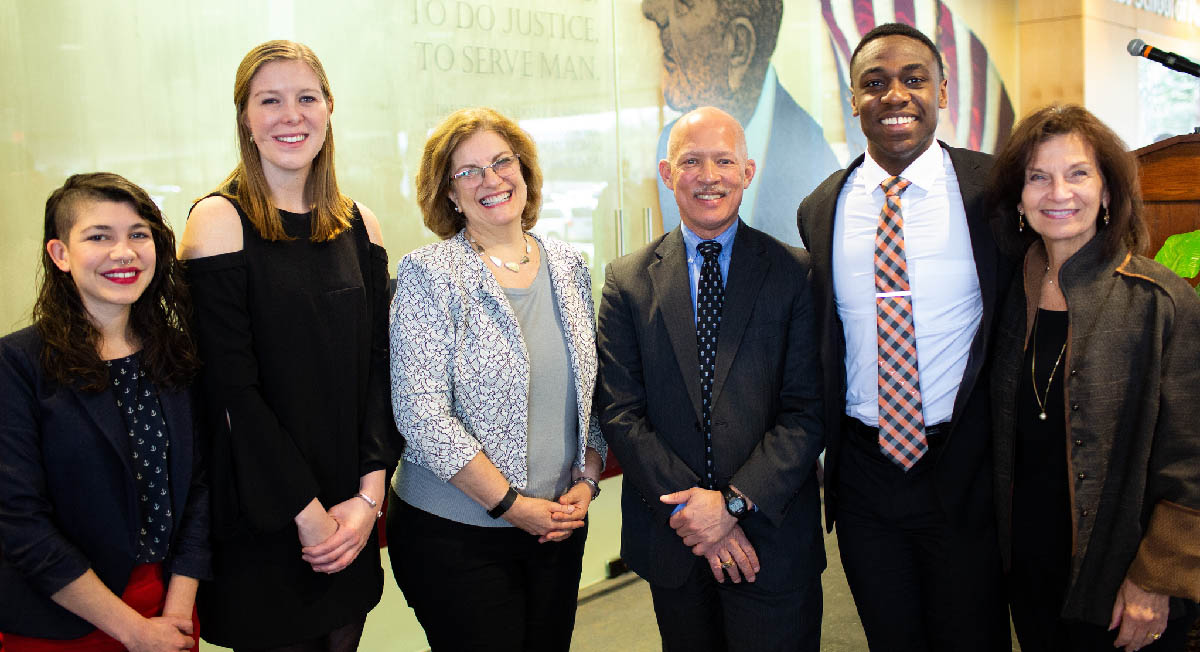 The weeklong celebration of Jordan's accomplishments and influence highlighted issues and policies that were important to her.

Citizenship and power were central to the theme of the 22nd annual Barbara Jordan National Forum, the signature, student-led weeklong program that pays tribute to the life and legacy of former congresswoman, distinguished public servant and teacher Barbara Jordan. This year's celebration, on the theme "Extending the Power of the People," took place Feb. 18–22, and was inspired by Jordan's words: "We believe that the people are the source of all governmental power; that the authority of the people is to be extended, not restricted."

The week featured events including an elementary school book drive, an interactive exhibit at the Texas State Capitol, programming on women in politics, ethics and public service values, diverse voices in politics and culture, and activism in Texas, as well as a keynote address on criminal justice reform by Dallas County District Attorney John Creuzot. Below is a sample of what took place.

On Feb. 12, Dr. Peniel Joseph, founding director of the Center for the Study of Race and Democracy (CSRD) at The University of Texas at Austin and Barbara Jordan Chair in Ethics and Political Values at the LBJ School, participated in a special media preview as the media representative of the Barbara Jordan exhibit.

With one of the many people Barbara Jordan touched!

This panel, hosted by the Feminist Policy Alliance and Pride Policy Alliance, put students face to face with elected officials to share insight on what it looks like to run for office and serve, and to inspire students to take what they've learned and enter the political realm. Guests: Rep. Jessica González (D-104), Rep. Vicki Goodwin (D-47), Rep. Shawn Thierry (D-146) and Monica Gomez (political director, Annie's List).

It was an honor to have you with us! @jessicafortexas https://t.co/Kp89WJ5PFC

Thank you so much to the LBJ School for giving me the opportunity to share my leadership journey with students directly. It was inspiring to meet with future Texas Leaders. #txlege #txdistrict47 #texasstrong https://t.co/OMjcIZXfJK

The documentary about the violent arrest of Austin schoolteacher Breaion King was followed by a panel discussion with Ms. King, her attorney, Erica Grigg, and directors David Heilbroner and Kate Davis, and moderated by the LBJ School's Michele Deitch.

Thank you to @GFColeman for hosting tonight's Traffic Stop screening about Breaion King's violent arrest in #ATX, but most of all thank you to Breaion for your bravery in the face of bigotry. #BLM pic.twitter.com/SPm0VzdBGn

This discussion, hosted by PAACC, featured Virginia Cumberbatch (MPAff '16), director of the Community Engagement Center (CEC) at the Division of Diversity and Community Engagement (DDCE) at UT, Kahron Spearman of the Austin Chronicle and Hopeton Hay of KAZI 88.7 FM, moderated by Dr. Peniel Joseph

A panel on authorship as part of the Barbara Jordan Forum Week @TheLBJSchool pic.twitter.com/Vv05e0lsUa

Thanks for having us. Always a blessing to come back and engage in the thought leadership + activist scholarship being cultivated @TheLBJSchool. Thanks @PenielJoseph for your leadership and collaborative spirit https://t.co/uqrAiSVGkW

Wednesday, Feb. 20: "Being an Activist in Texas"

On Wednesday evening, #BarbaraJordanForum2019 hosted a panel on activism in Texas with Susan Almanza of PODER, @BalanceAtx and @alejandrinazoom. pic.twitter.com/Xbvexu7r7Z

Today we celebrate what would have been Barbara Jordan's 83rd birthday with a day of tribute at @JordanJaguars. As LBJ students champion her legacy this week, we are reminded of her fierce dignity, tenacious spirit and hard work. https://t.co/f2FZvO4yvK @TexasMonthly

"Too often young leaders become servants of what is rather than shapers of what might come." Happy 83rd to a woman the world lost too soon. Thank you for sharing your voice to empower others during your time on this earth, Barbara Jordan pic.twitter.com/3qaN2O0uSi

District Attorney John Creuzot is a retired judge and award-winning lawyer who has more than three decades of experience in the criminal justice system, including as a felony district court judge, Dallas County assistant district attorney and chief felony prosecutor, as well as a criminal defense lawyer in private practice. He took office in January with a new plan for criminal justice in his jurisdiction: to prosecute only violent criminals. For lesser offenses his office will seek alternatives and dismiss all first-time cases of marijuana possession in small amounts. Too many people who do not threaten public safety have ended up in jail, he said, which is too expensive. Creuzot also joined LBJ School Dean Angela Evans for the "Policy on Purpose" podcast.

"We have over-incarcerated America. When we have a social problem, we create a criminal solution to it. We have learned this does not solve America's problems." Dallas County District Attorney John Creuzot at #BarbaraJordanForum2019 pic.twitter.com/6Pk80GF0eI

Thank you to everyone who participated in #BarbaraJordanForum2019. Citizenship and power were central to this year's signature, student-led weeklong program.

Co-chairing the #BarbaraJordanForum2019 @TheLBJSchool with my talented and hardworking classmates @hanna_munin and @theliberiankid was an incredible experience! s/o to all the wonderful speakers, the community members who attended & the incredible comms team. See you next year! https://t.co/Z3f3paDcDp

Thank you, @thelbjschool for this opportunity to serve my fellow LBJers, Longhorns, and the Austin community by sharing the legacy of Barbara Jordan.
.
.
As a… https://t.co/EDNZz706jP

Many thanks to the Forum chairs, student organizers, participants and attendees who made the 2019 Forum such a success. Barbara Jordan’s legacy is alive and well at LBJ. AE