Divided We Fall: America's Secession Threat and How to Restore Our Nation | LBJ School of Public Affairs | The University of Texas at Austin
Skip to main content

Divided We Fall: America's Secession Threat and How to Restore Our Nation 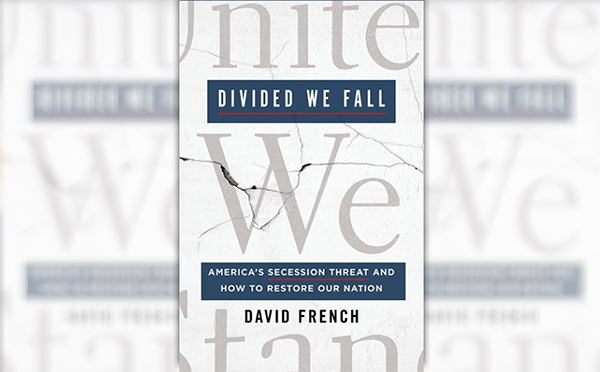 David A. French, Senior Editor, The Dispatch and Jay Hartzell, President, The University of Texas - Austin

On Monday, Oct. 19, the Clements Center for National Security and The Bech-Loughlin First Amendment Center will host David A. French, senior dditor of The Dispatch and formerly president of the Foundation for Individual Rights in Education and senior counsel for the Alliance Defending Freedom, and University of Texas at Austin President Jay Hartzell, on French's recently published Divided We Fall: America's Secession Threat and How to Restore Our Nation. French will focus on the importance of free speech and pluralism to America's strength, and also discuss how division at home threatens our national security abroad. This event will be part of UT's participation in national Free Speech Week.

Please note that you must have a registered Zoom account to be able to log in to this webinar. Attendance is limited and registration does not guarantee admission.

Political polarization has been a constant in American politics since its founding, but in recent years has become a grave and very real threat to the stability of the country. Two decades into the 21st century, the U.S. is less united than at any time in history since the Civil War. And like during the Civil War, secession could very well be the consequence of this political divide. In Divided We Fall: America's Secession Threat and How to Restore Our Nation (St. Martin's Press), columnist and author David French warns of the potentially dire dangers to the country if political differences are not reconciled. In personal and accessible prose, he offers a hopeful path forward based on James Madison's vision of pluralism.

The U.S. is more diverse in its beliefs and culture than ever before. But red and blue states, secular and religious groups, liberal and conservative idealists, and Republican and Democratic representatives all have one thing in common: each believes their distinct cultures and liberties are being threatened by an escalating violent opposition. This polarized tribalism, espoused by the loudest, angriest fringe extremists on both the left and the right, dismisses dialogue as appeasement; if left unchecked, it could divide the country in real and lasting ways.

Divided We Fall combines an engaging mix of cutting edge research and fair-minded analysis to provide an unblinking look at the true dimensions and dangers of this widening ideological gap, and what could happen if steps aren't taken toward bridging it. French reveals chilling, plausible scenarios of how the United States could fracture into regions that will not only weaken the country but destabilize the world. The good news is that there is still time for change. By implementing James Madison's vision of pluralism—that all people have the right to form communities representing their personal values—oppressive factions can be prevented from seizing absolute power. Everyone's beliefs and identities across all 50 states can be maintained and allowed to flourish.

Reestablishing national unity will require the bravery to commit to embracing qualities of kindness, decency and grace toward those we disagree with ideologically. French calls on all Americans to demonstrate true tolerance so the American divide can be healed.

David French is a senior editor for The Dispatch and was formerly a senior writer for National Review. He is a New York Times best-selling author, and his latest book is Divided We Fall, published by St. Martin’s Press. He is a graduate of Harvard Law School, the past president of the Foundation for Individual Rights in Education, and a former lecturer at Cornell Law School. He has served as a senior counsel for the American Center for Law and Justice and the Alliance Defending Freedom. French is a former major in the United States Army Reserve. In 2007, he deployed to Iraq, serving in Diyala Province as Squadron Judge Advocate for the 2nd Squadron, 3rd Armored Cavalry Regiment, where he was awarded the Bronze Star. He lives and works in Franklin, Tennessee, with his wife, Nancy, and his three children.

Jay Hartzell is the president of The University of Texas at Austin. He holds the Trammell Crow Regents Professorship in Business. He is also a Texas Ex. Prior to serving as president, Hartzell served as the 12th dean of the McCombs School of Business at UT Austin, one of the largest and most distinguished business schools in the country. As dean for over four years, Hartzell launched the Goff Real Estate Labs, elevated the Canfield Business Honors program and opened Rowling Hall, the home of UT's MBA program. He helped create many significant partnerships with colleges and schools across campus including the Dell Medical School, the College of Fine Arts, the College of Liberal Arts, the College of Natural Sciences and the Moody College of Communication. He also established the position of associate dean of diversity and inclusion at the McCombs School and the McCombs Diversity and Inclusion Committee.