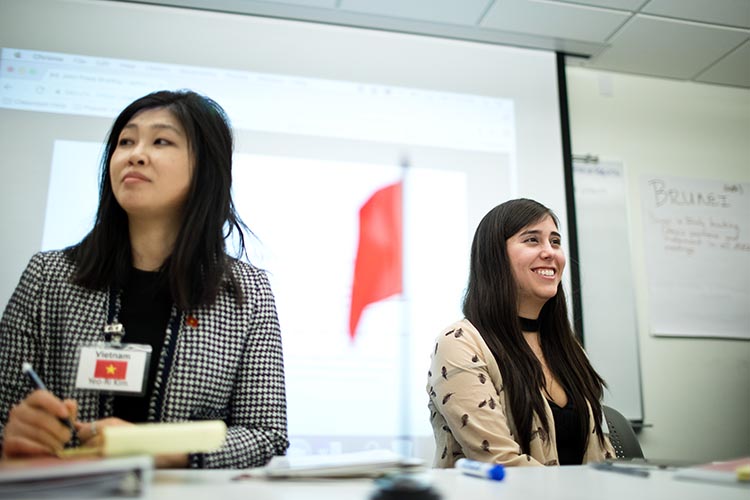 Last weekend, LBJ School students in the Master of Global Policy Studies program took part in the biennial Crisis Simulation event, which provides an opportunity to experience a complex and high-level multilateral diplomatic negotiation under time pressure and uncertainty. The simulation, required of all Global Policy Studies students, builds skills in teamwork, leadership, multitasking, negotiation and rapid analysis of shifting policy positions. This year, the topic was the conflict over territorial claims in the South China Sea. 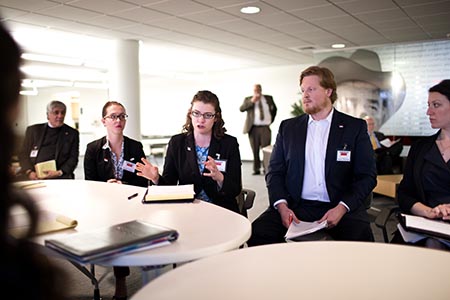 “I think the diplomatic and negotiation skills we worked on during the Crisis Simulation will be helpful in almost any career.” —Hayden English, U.S. delegation 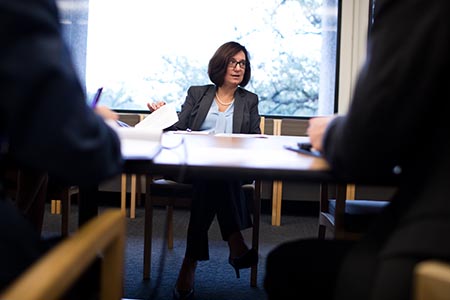 The U.S. Army War College (including Ritchie Dion, pictured below, center) developed and conducted the exercise. In addition, the LBJ School’s Diplomat-in-Residence, Julie Kavanagh, (pictured above) played the role of a United Nations special representative, facilitating the peace conference and mediating some negotiation sessions to advance a solution. 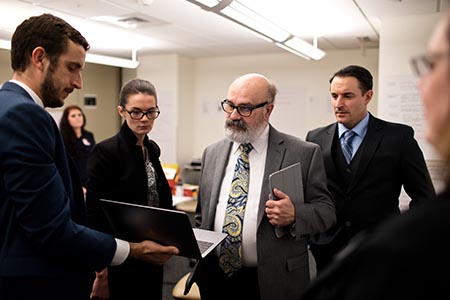 "The press influenced diplomatic relations by providing an honest take on what was happening. If a delelgation was sitting on its hands, we would mention it. If there was an issue that nobody was talking or thinking about, we would write about it. Ultimately, what we wrote influenced the thinking and behavior of many delegations in the simulation." —Ryan Duffy, press corps

“I was a negotiator for China. I was part of a fabulous team that took the simulation and our role very seriously. Due to the leadership of Molly [Adler], our head of delegation, we coordinated our appearance, mannerisms and negotiating style. I believe this made us appear intimidating (and made the simulation more fun for us and everyone else).” —Laura Robinson, China delegation (pictured below, left) 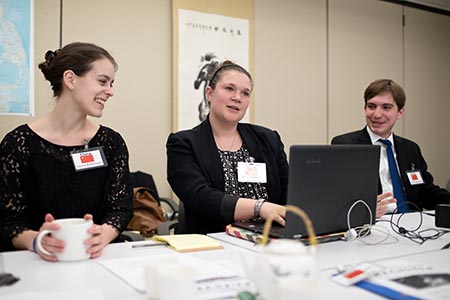 “The American team acted as behind-the-scenes mediators and facilitators throughout the scenario. We quickly partnered with Japan and India to form a negotiating block advocating for the inclusion of extra-regional states and their interests—adherence to established international law, de-escalation and nonmilitary solutions to territorial disputes.” —Hayden English, U.S. delegation 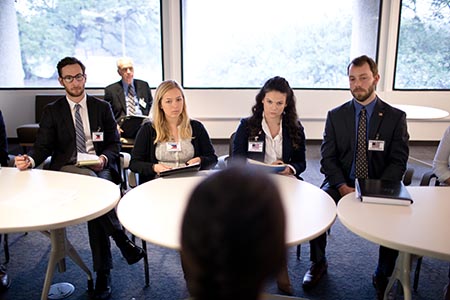 This was the first year Dr. Lorinc Redei, graduate advisor for LBJ’s Global Policy Studies program, incorporated into the exercise the press corps, which was dedicated to reporting, analysis and commentary on the negotiations among national delegations.

“I was a reporter for the press corps team. The press has an immeasurable impact on diplomatic relations–at least in the real world. The press forces accountability by spotlighting the ins and outs of what’s happening in country-to-country relations. Without a free and robust press, it’s impossible to have an informed citizenry.” —Daniel Leffler, press corps (pictured above, left)

The 2018 simulated crisis revolved around competing territorial claims regarding islands and exclusive economic zones in the South China Sea. Brunei, China, Indonesia, the Philippines and Vietnam all claim sovereignty over different islands and maritime areas, making this geographic region a real-life example of a frozen conflict over territory.

“Our objective as China was to maintain the status quo and uphold our sovereignty over the South China Sea. Anything that eroded our sovereignty was a red line for us. Otherwise, we achieved our objective of upholding our sovereignty; sadly, for all the other teams, that meant no diplomatic agreements were made.” —Laura Robinson, China delegation

Throughout the simulation, students remained in character, playing specific roles within their teams: heads and deputies of delegations, negotiators or strategists, or editors or reporters, to name just a few. Each team also included a high-ranking professional mentor to advise students on tricky situations. Students therefore benefitted from the experience of several former U.S. Ambassadors during the exercise. 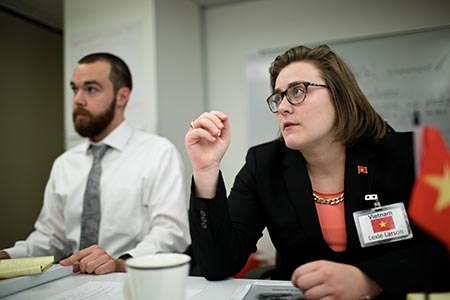 The hands-on nature of the simulation meant that students were exposed more deeply to the ins and outs of negotiation than ever before.

“It was eye-opening to realize how important each word is in a diplomatic agreement. Once other teams got involved in adding their language, we had to carefully review each draft and change it word-by-word.” —Laura Robinson, China delegation

And as for the impact of that new press corps role in the exercise? 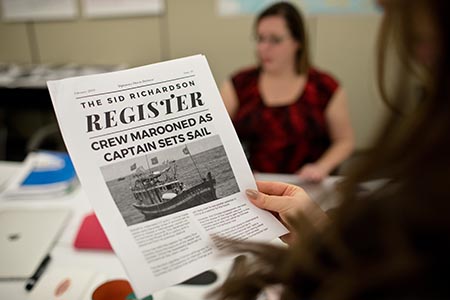 "The Press Corps held simulation delegations accountable. We reported the simulation's proceedings and shaped the narrative surrounding the negotiations. Our correspondents actively covered the nogiations. They investigated the motives and meneuvering of each country, peering beyond a surface-level analysis of what was happening. One of the key developments of the simulation was driven by the press." —Ryan Duffy, press corps

Redei says he looks to continue including the Press Corps team in future exercises. In addition, the U.S. Army War College wants to discuss how they can take the idea of having a press corps and integrate it into all of their exercises in the future.