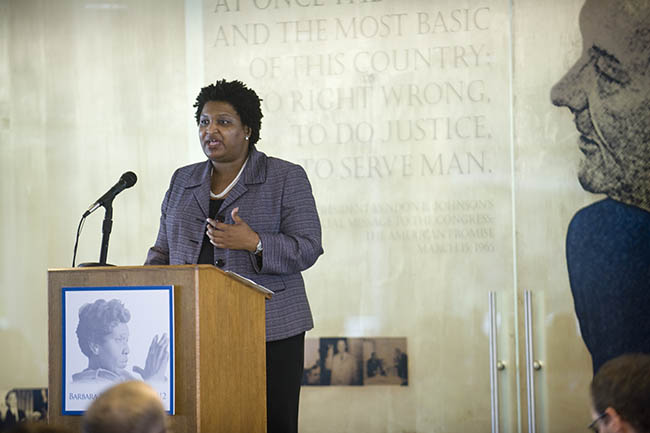 On the heels of Stacey Abrams (MPAff '98) winning the Georgia Democratic gubernatorial primary, we are taking a look back at her 2012 Barbara Jordan National Forum keynote speech at the LBJ School.

Abrams, who is both the first woman to lead either party in the Georgia General Assembly and the first African-American to lead in its House of Representatives, framed her address around authenticity, courage and action.

"Each of us is obligated to act in three steps: educate, activate and agitate. Pick an issue that matters to you, and make it your mission to become the expert." —Stacey Abrams (MPAff '98)

"Barbara Jordan's life is a testament to authenticity," she said. "To a willingness to take actions not regardless of the consequences but because she understood that consequences did matter."

Since then, Abrams's star has risen. She took the stage at the 2016 Democratic National Convention and is recognized as a vocal leader in increasing minority voter registration in Georgia.

Voting rights was a key theme in her Barbara Jordan National Forum keynote. She called for Americans to have the courage to demand democracy in the face of reapportioned voting maps and encouraged students to be guided by Jordan's example of work toward equality, empowerment and change.

"Each of us is obligated to act in three steps: educate, activate and agitate," Abrams said. "Pick an issue that matters to you, and make it your mission to become the expert."

She continued to say that the America we pursue will not be easily won and, if captured, it will be difficult to hold.

"That America, that flawed and wonderful America, is our very birthright and together, following the guidepost that was Barbara Jordan, we can finally claim it," she said. "We have only but to act."

"That flawed and wonderful America, is our very birthright and together, following the guidepost that was Barbara Jordan, we can finally claim it. We have only but to act." —Stacey Abrams (MPAff '98)

Following her speech, a representative from the office of the mayor presented Abrams with a proclamation announcing Feb. 21 as Stacey Abrams Day.

The Annual Barbara Jordan National Forum, traditionally held in February, is organized by LBJ School students and designed to celebrate the former congresswoman's contributions as a politician, policymaker and educator. Jordan made history throughout her career, and is recognized as both the first black woman to serve in the Texas Legislature and the first Southern black woman elected to the U.S. House of Representatives. Her national profile grew when she served as a moral compass during the Watergate scandal and as the first African-American keynote speaker at a Democratic National Convention. She is remembered as a groundbreaking politician and unwavering voice for justice and equality.

This year marks the 20th Annual Barbara Jordan National Forum. The LBJ School commemorates her legacy with keynotes by Mary Beth Rogers and Rep. Senfronia Thompson, a screening of the documentary biography "Get in the Way: The Journey of John Lewis," a day of service at Barbara Jordan Elementary School and various student-led programming on social justice and policy issues. Read more about the 2017 Forum.

Stacey Abrams is the House Minority Leader for the Georgia General Assembly and State Representative for the 89th House District. She is the first woman to lead either party in the Georgia General Assembly and is the first African-American to lead the House of Representatives. Abrams serves on the Appropriations, Ethics, Judiciary Non-Civil, Rules and Ways and Means committees.

First elected to the Georgia House of Representatives in 2006, Abrams quickly became known for her expertise and ability to explain complicated tax and legal questions, and she earned a reputation for working across party lines to pass legislation. In 2010, Abrams became House Minority Leader and has led the caucus to promote and pass legislation to increase educational opportunity, promote economic security and improve the quality of life for all Georgians.

In 2012, Abrams received the prestigious John F. Kennedy New Frontier Award, which honors an elected official under 40 whose work demonstrates the impact of elective public services as a way to address public challenges. She has been recognized nationally as one of the 2014 Public Officials of the Year by Governing magazine. Abrams has received the Friend of Labor Award from the Georgia AFL-CIO and A-ratings from the Georgia Chamber of Commerce. In April 2014, she received the inaugural Gabrielle Giffords Rising Star Award from EMILY's List and was named to The Root 100. She is also a 2014 Aspen Rodel Fellow and a 2014 Hunt-Kean Leadership Fellow.

Abrams has published articles on issues of public policy, taxation and nonprofit organizations, including pieces in The Christian Science Monitor, Yale Law and Policy Review, U.S. News and World Report and The Huffington Post. She is also the award-winning author of several romantic suspense novels, writing under the pen name Selena Montgomery.

Abrams serves on the boards of trustees for Agnes Scott College and Atlanta Metropolitan State College Foundation, the board of directors for the Gateway Center for the Homeless, the Georgia Partnership for Excellence in Education, the Board of Visitors for the University of Georgia, and the advisory boards for Literacy Action, Project GRAD and HSTAT — Health Students Taking Action Together. She lives in Atlanta.