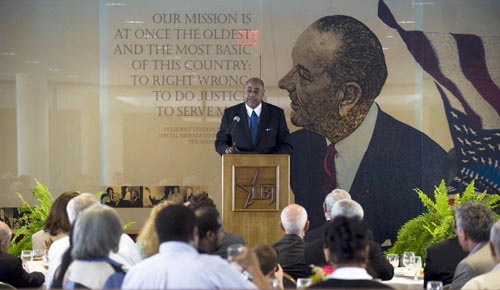 In preparation of the 20th Annual Barbara Jordan National Forum, we’re taking a look back at some of the Forum’s most notable speakers.

Ellis, who is recognized as the Distinguished Graduate of the Class of 1977, was elected to the Texas Senate in 1990, holding the same senate seat as Barbara Jordan, a politician, policymaker, activist and educator. After 26 years of service in the Texas senate, Ellis won the race for Harris County Commissioner for Precinct One in 2016. As the Harris County Precinct One Commissioner, Ellis will exercise broad policymaking authority in conducting the general business of the county.

Throughout his public service career, Ellis has exemplified Jordan’s spirit as a champion of education, civil rights and criminal justice. During his keynote, “The Promise of Freedom: Justice and Democracy in America,” Ellis spoke of Jordan’s eloquence, advocacy and passion for teaching.

“People listened to Barbara, not just because she sounded great, but because she had something to say,” Ellis said. “She fought for more open government. She fought to repeal the institutions of segregation. She fought for equal rights for women, Hispanics, African Americans and for all Texans.”

“And for whatever things Barbara Jordan – senator and congresswoman – did not accomplish in her elected life, she came here to be a teacher with the hope that one of you would become a United States senator, a governor, a Supreme Court Justice or a president of the United States.” —Rodney Ellis '77

Like Jordan, Ellis has dedicated much of his career to the mentorship and education of students. In 1990, Ellis founded the Texas Legislative Internship Program, an educational internship program for undergraduate and graduate students attending Texas colleges and universities to serve as interns in the Texas legislature, various state agencies and local government. Ellis, who called the program his “pride and joy,” also served as an advisor to the interns.

“Of all of the accolades on her resume and all of the things that one could have put on her headstone in the state cemetery, what stands out in the boldest print is teacher. And maybe that is because at the end of the day, the most significant gift that any of us can give to future generations is being a teacher,” Ellis said as he concluded.

“And for whatever things Barbara Jordan – senator and congresswoman – did not accomplish in her elected life, she came here to be a teacher with the hope that one of you would become a United States senator, a governor, a Supreme Court Justice or a president of the United States.”

2017 marks the 20th Annual Barbara Jordan National Forum. The LBJ School commemorates her legacy with keynotes by Mary Beth Rogers and Rep. Senfronia Thompson, a screening of the documentary biography “Get in the Way: The Journey of John Lewis,” a day of service at Barbara Jordan Elementary School and various student-led programming on social justice and policy issues. Read more about the 2017 Forum.

Commissioner Rodney Ellis was born and raised in Houston’s Sunnyside neighborhood and attended the Texas public school system from grade school through law school. Although he is an attorney, his passion is public service.

On Nov. 8, 2016, he was elected Harris County Commissioner for Precinct One, which serves more than 1.1 million people. Previously, he represented a Houston district in the Texas Senate for more than 25 years, earning widespread praise as a leader on economic development, education, civil rights, budget issues, responsible environmental policy, tax cuts for the middle class, criminal justice, and workforce development.

Commissioner Ellis believes the role of government is to ensure that all citizens have the opportunity and ability to build a better future for themselves. As Harris County Commissioner, he is dedicated to providing quality and accessible services and programs that will enhance the lives of citizens in Precinct One and fighting for reforms that will benefit all Harris County residents.

During his career in public service, Commissioner Ellis has worked hard to ensure that children have equal access to a quality education, regardless of where they reside. He also has spearheaded legislation to provide employees with a safe workplace, access to affordable health care and a living wage. In criminal justice, he has fought for reforms that guarantee equal treatment for everyone under the law. It’s his cardinal belief that guilt and innocence must never be dependent on one’s income, gender, race or ethnicity.

Commissioner Ellis is married to Licia Green-Ellis and has four children.