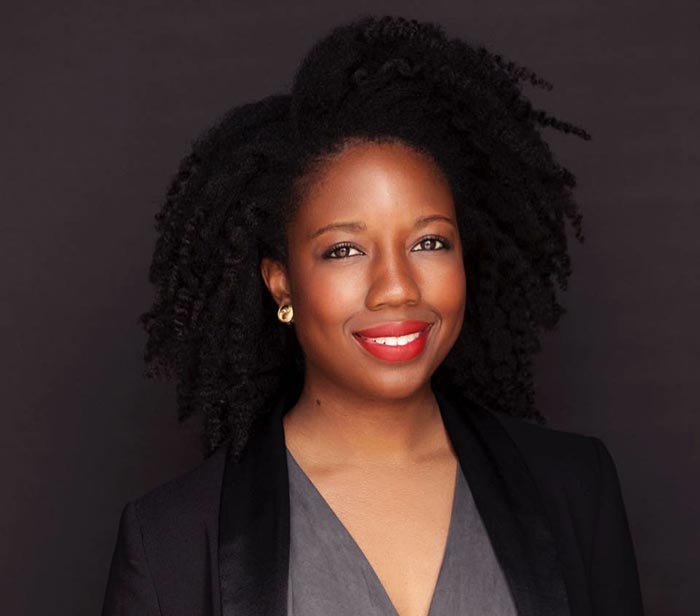 Virginia Cumberbatch was born and raised in Austin—but she didn't expect to stick around for graduate school. After graduation from St. Stephen's Episcopal School in west Austin, she headed east to attend Williams College in Massachusetts, where she double majored in anthropology and history with a focus on critical race theory.

Growing up in central Austin, most of the spaces in which she and her three siblings operated were homogenously white. Her family was one of the only black families in her neighborhood, and Virginia was one of only three black students in her graduating class. Though her own family had means, she recognized that was not the case for most communities of color on Austin's east side. At Williams College, she knew she wanted to learn more about racial equity, and through her studies and an internship at the National Education Foundation, she became more deeply interested in social justice work.

After college, Virginia returned to Austin with a job in public relations and public affairs and immediately became involved in local issues through the Urban League. From there, she had the opportunity to found a nonprofit dedicated to bringing young professionals together to discuss issues of urban equity. With the Urban League, she created a space for black and brown voices to come together and through the group’s conversations about equity and social justice, something clicked. She began looking into graduate policy schools.

At first, she assumed she would head back east for graduate school. Then, on the Urban League board, she met Dr. Gregory Vincent, UT's vice president for diversity and community engagement.

Vincent talked to her about UT's programs, including the innovative work at the Division of Diversity and Community Engagement (DDCE). So while she applied to and was accepted to several programs, she saw the best opportunities right here in Austin. At UT and LBJ, she was excited that she could be a student and a practitioner at the same time.

In the Master of Public Affairs (MPAff) program, Virginia set out to hone her "hard skills" like empirical methods and financial management. She wanted to practice these things through the lens of racial equity and advocacy, so she chose papers and projects that reflected those interests. She appreciated LBJ's flexible curriculum that allowed her to take classes outside of LBJ in anthropology, sociology and African studies to complement LBJ's hard skills courses.

A few courses really stood out in her journey. A joint LBJ/McCombs social entrepreneurship course taught her about new models for advocacy work in additional to the traditional nonprofit and think tank approaches. She took a social justice philanthropy course in the nonprofit track which helped crystalize her ideas around methods to achieve justice. Professor Ed Dorn's policy development class on race, immigration and citizenship exposed her to methods for viewing and changing policy while deepening her understanding of how Americans racialize what citizenship means.

Her time at LBJ and UT led quite naturally to her current role as director of UT's Community Engagement Center under the Division of Diversity and Community Engagement. In this role, she pursues opportunities to make UT less of an ivory tower and more of a community anchor. She's working to ensure UT can use its world-class resources to improve the local community. She identifies resources, research and expertise and connects them to community organizations and entities to help address issues in underserved communities. Located in east Austin, the Community Engagement Center focuses on issues of healthcare, education equity, gentrification/affordability and law enforcement. Her team holds regular "front porch" gatherings to connect university researchers and resources to the community in dialogue and strategy sessions.

Not one to sit still, in November 2016 Virginia was appointed to Austin Mayor Adler's task force on institutional racism and systemic bias, a group with a goal to identify areas of racism and bias systemically producing inequity. At the beginning of April 2017, the group issued a 70-page report with recommendations to improve equity and access in housing, criminal and civic justice, banking and finance, and education.

It's been a busy year since her 2016 MPAff graduation, so we asked Virginia to take a break and reflect on her time at LBJ.

How did LBJ help you in your career/ after graduation?

LBJ coupled classroom learning with work in the community. It gave me affirmation about the work I felt called to do through the research I conducted and through working with professors like Shirley Franklin. At LBJ, I had the ability to be a leader at the school, to be part of committees and groups that have real impact, such as the diversity and inclusion committee (D&I). It's gratifying to see some of the D&I work still being implemented in the school now. That's a real silver lining—students can be leaders in the school, and that experience has served me well after graduation. Overall, LBJ gave me a space to exercise the work I was called to do.

What is the greatest lesson you’ve learned professionally?

Having an amazing team around you is 79 percent of your success. My current job had been around for six years but was without a director for one year, so having a great team already in place has helped me have success, especially given my age—I'm younger than some staff by 30 years!

Also, I've learned that in order to be a good leader, you have to make sure you are continuing to nurture yourself. You don't know everything! So, what are you doing to grow and learn and how are you taking care of yourself? It can be especially hard for people in advocacy to take the time to nurture themselves—but it's crucial. When you're depleted, you're no good to anyone.

This is the quote I live by: "An individual has not started living until he can rise above the narrow confines of his individualistic concerns to the broader concerns of all humanity." —Dr. Martin Luther King

In our careers, so much is about our personal brands—so it's important to keep the broader perspective. For me, that starts with my faith.

Last fall I went to Geneva and visited the UN. I got on a bus with six strangers to France—a big moment of bravery for me! I'm also really in to fashion. I have friends who are popular fashion bloggers, and I just love to talk (and wear!) great fashion.

I'm involved in several local boards—KLRU, Six Square, Austin's Black Cultural District and Austin Shapers (through the World Economic Forum). If you're not already involved—find a board or commission that speaks to you!